Kinh doanh: Facebook Has a Blind Spot in South Asia

If you would like to receive South Asia Brief in your inbox every Thursday, please sign up here.

Facebook documents recently leaked by company whistleblower Frances Haugen detail the social media giant’s long-standing failure to curb hate speech. After Haugen’s appearances before U.S. lawmakers and a U.K. Parliament committee, much debate has centered around the impact of Facebook’s policies in the West. But Facebook has also failed in South Asia—and in more dangerous ways with even higher costs than in the West.

Religious intolerance, powerful hate groups, and rapid internet penetration have created a perfect storm for the dissemination of hate speech throughout the region and in India in particular. In many South Asian countries, Facebook is the most used social network. But the company has not built the capacity to thoroughly monitor hate speech in South Asian languages. It often fails to remove inflammatory content, which has mobilized mobs and provoked deadly violence. These failures also strengthen hard-line political parties for which divisive rhetoric is politically expedient, including India’s ruling Bharatiya Janata Party (BJP).

India is Facebook’s largest market by users, and it remains one of its fastest growing markets. As a result, it is also the epicenter of the company’s problems with hate speech. Last week, the Wall Street Journal reported Facebook researchers found inflammatory content coincided with communal riots in 2020 that killed 53 people in New Delhi. Individual users, extremist groups, and political parties regularly gain prominence by sharing hate speech and misinformation on the platform, especially against Muslims.

This trend goes as far back as 2015, when a Hindu nationalist vigilante flogged a Muslim laborer in India’s Uttar Pradesh state as people filmed the incident and uploaded it to Facebook, where it earned praise from like-minded users. Months later, the vigilante became a top state leader of Bajrang Dal, a Hindu nationalist youth militant group.

Facebook lacks both the capacity and the will to properly police hate speech in South Asia. Inflammatory content often goes undetected because the company’s monitoring software can’t process local languages. In India, Facebook has also refused to act against ruling party politicians that post hate speech for fear of hurting its business prospects in the country, which the Wall Street Journal reported last year.

Personal relationships between the company and political leaders may also play a role: Bloomberg reported on the close links between Facebook executives and Indian government officials, including Facebook’s own efforts to help develop the “online presence” of Indian Prime Minister Narendra Modi. The company’s former top public policy official in India was also accused of backing the BJP.

Such disclosures fuel suspicions about Facebook providing electoral advantages to India’s ruling party, even if indirectly. On the eve of India’s 2019 elections, which the BJP won in a landslide, Facebook disclosed it had removed fake content associated with the opposition Indian National Congress party but not the BJP. In light of Haugen’s revelations, this week the Indian National Congress party called for a probe to look into evidence of Facebook “influencing” Indian elections.

However, the relationship between Modi’s government and Facebook is not what it used to be. During Modi’s first term, he met Facebook CEO Mark Zuckerberg twice. That wouldn’t happen today: Earlier this year, WhatsApp sued the government over new internet laws that it said compromise user privacy. But critics still harbor suspicions that the platform remains biased toward the BJP. During the COVID-19 crisis, a campaign using #ResignModi was temporarily blocked on Facebook, heightening this sentiment.

Facebook’s failures in the region are not limited to India. In 2019, Bangladeshi Muslims engaged in riots near their capital, Dhaka, in response to a derogatory Facebook post about the Prophet Muhammad, leading to four deaths. Earlier this month, two men confessed to inciting violence against the Hindu community by posting inflammatory content on social media.

In Sri Lanka, an investigation by a human rights group found that anti-Muslim hate speech and fake news on Facebook and other platforms may have contributed to violent clashes in central Sri Lanka in 2018, resulting in at least three deaths and damage to mosques and Muslim businesses. Rioters allegedly used Facebook to coordinate attacks.

And in Pakistan, people have used the platform to stoke hatred against the Ahmadi religious minority, resulting in “rampages” that have led to burned homes and deaths. In 2018, a Pakistani teenager killed an Ahmadi man after posting a video on Facebook saying the Prophet Muhammad had ordered him to “finish off” the man. Facebook only removed the video after Rest of World reported on it.

South Asia’s online hate speech epidemic isn’t entirely Facebook’s fault. The company is not responsible for the conditions that breed intolerance in the region. Governments can also do more to enhance social media literacy, so users can better distinguish between accurate and fake news. Unfortunately, in a region that has taken an authoritarian turn, many governments have instead taken advantage of concerns about unregulated online content to crack down on dissent.

Nonetheless, Facebook has a major crisis on its hands: It is a platform for hate speech to spread far and wide. There are nearly half a billion Facebook users in South Asia, including more than 340 million users in India. Dhaka has the second largest number of active Facebook users of any city in the world. (These numbers rise even higher when Facebook-owned services, such as WhatsApp, are taken into account.) South Asia presents huge opportunities for Facebook, but against the backdrop of religious intolerance and communal tensions, it looks like a powder keg.

Nov. 3: The Stimson Center hosts a webinar on South Asian security issues with emerging analysts from the region.

Pakistan’s economy sputters. Skyrocketing prices in Pakistan have left the economy reeling. Local media reported inflation has reached its highest level in 70 years. Government figures released this week show electricity rates have risen nearly 60 percent in the last three years, and the prices of ghee and sugar rose by 108 percent and 83 percent, respectively.

The government blames global inflation, but Pakistan recently suffered two additional blows. It failed to reach an agreement with the International Monetary Fund on the release of the next funds associated with a much-needed bailout package. Meanwhile, the Financial Action Task Force, a global terrorist financing watchdog, announced it will keep Pakistan on its watchlist, which could make attracting foreign investment harder.

Growing threat in Afghanistan. As Afghanistan faces a humanitarian crisis, it is also grappling with the threat of the Islamic State-Khorasan. The extremist group has been present in the country since 2015, but it has stepped up its attacks as it seeks to undermine the Taliban’s efforts to consolidate power, including conducting two recent mass casualty assaults on mosques. And it could get stronger. Disaffected Taliban foot soldiers could shift allegiances to the Islamic State-Khorasan, and security experts fear some former Afghan military members could as well. 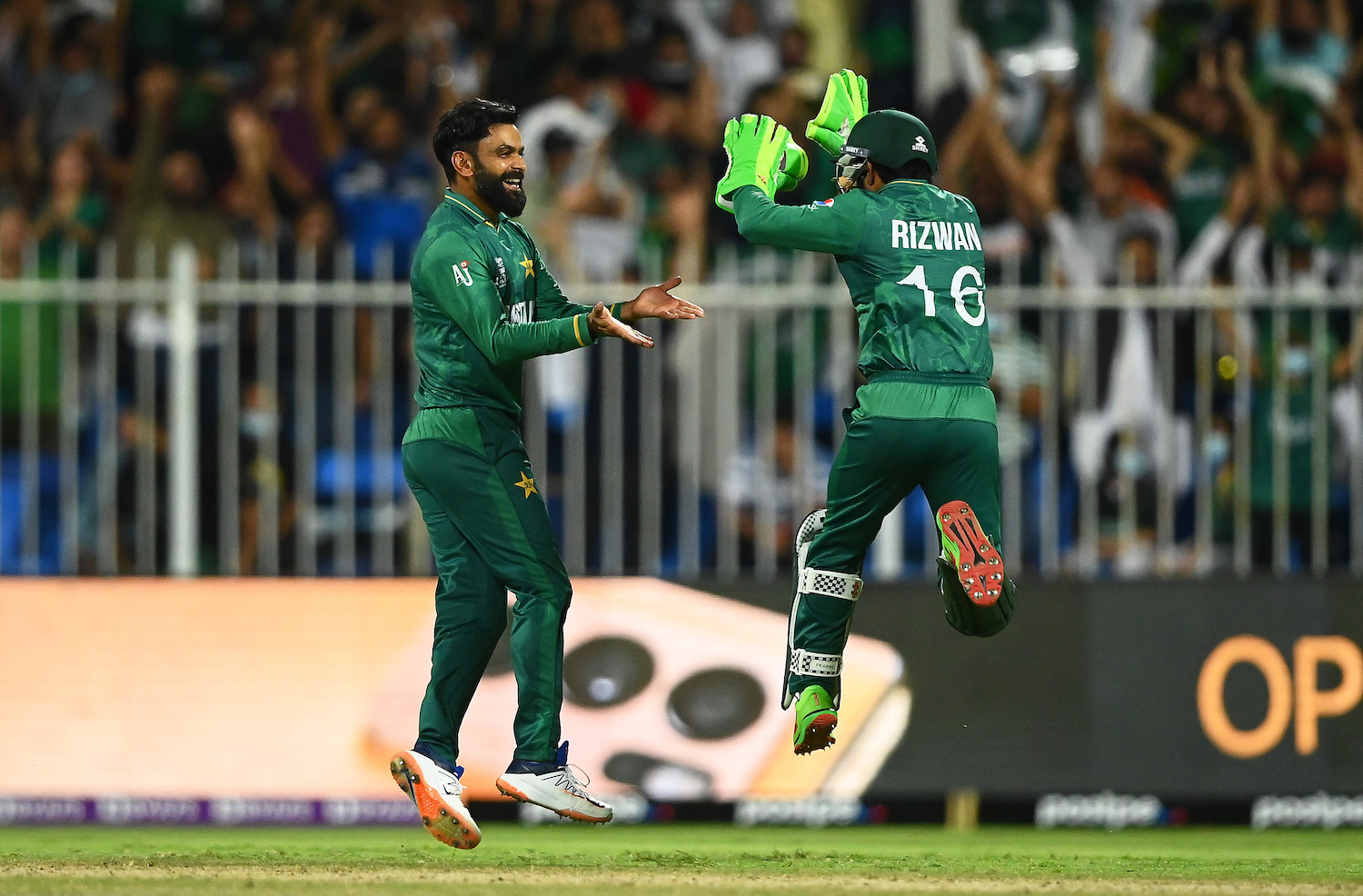 Cricket fever. In cricket-mad South Asia, few events generate more excitement than international tournaments. This year’s T20 World Cup event, hosted by the United Arab Emirates, has sent Pakistanis into a frenzy since it started last weekend. On Sunday, the national squad soundly defeated the heavily favored Indian team—the first time Pakistan had defeated its rival in World Cup play. And on Tuesday, Pakistan vanquished New Zealand. (The Kiwis angered Pakistan last month when the team canceled a scheduled match in Rawalpindi, Pakistan, just before it was scheduled to start.)

The tournament’s sentimental favorite is Afghanistan, which defeated Scotland on Monday and will play Pakistan on Friday. Even some Pakistani fans have said they could live with losing to the Afghans because the country deserves something to celebrate at such a difficult moment.

On Oct. 14, Bhutan signed a memorandum of understanding with China, calling for a three-step process to settle their disputed border. In recent years, Beijing has rapidly deepened its footprint in South Asia, including in countries with historical ties to New Delhi. Trade and investment have fueled most of these advances, but several have been military moves.

In June 2017, Chinese troops’ efforts to extend a road construction project into a border area claimed by both China and Bhutan prompted Indian forces to enter the area. A two-month standoff ensued. If the memorandum of understanding leads to a border dispute resolution, it will significantly bolster Bhutan-China relations and create more possibilities for Chinese investment.

That would leave India in a disadvantageous position, especially as its own relationship with China remains on ice after the deadly border clash in Ladakh last year. Despite some troop disengagements, negotiations to end India-China border tensions have failed.

“If the United States and the rest of the world shares information with us, we could defeat Daesh in just days.”

—A senior Taliban leader, telling the Washington Post the group welcomes outside assistance to tackle the Islamic State terror group—a claim other Taliban leaders have rejected.

In the Dhaka Tribune, journalist Mahmudur Rahman laments how “devilish politicians” and “power-hungry religious bigots” undermine efforts to promote peaceful communal harmony in Bangladesh. He calls on local communities to “reach out to the Hindu faithful and re-build faith in humanity” in the aftermath of recent religious violence.

Writer Upul Wijayawardhana complains about misrepresentations and mistakes about Buddhism in the Sri Lankan press, in a piece for the Island. “Buddhist principles are distorted and destroyed whilst those in authority are in a slumber. … I often wonder, whether the future of Buddhism is in the West!” he writes.

Journalist Leena Misra writes for the Indian Express about the garba, an Indian dance. Although public garba events have faced challenges recently due to communal tensions and the coronavirus pandemic, she is confident about the dance’s continued popularity. When India’s Gujarat state government held a recent garba event, “the dance returned with a vengeance,” she writes.